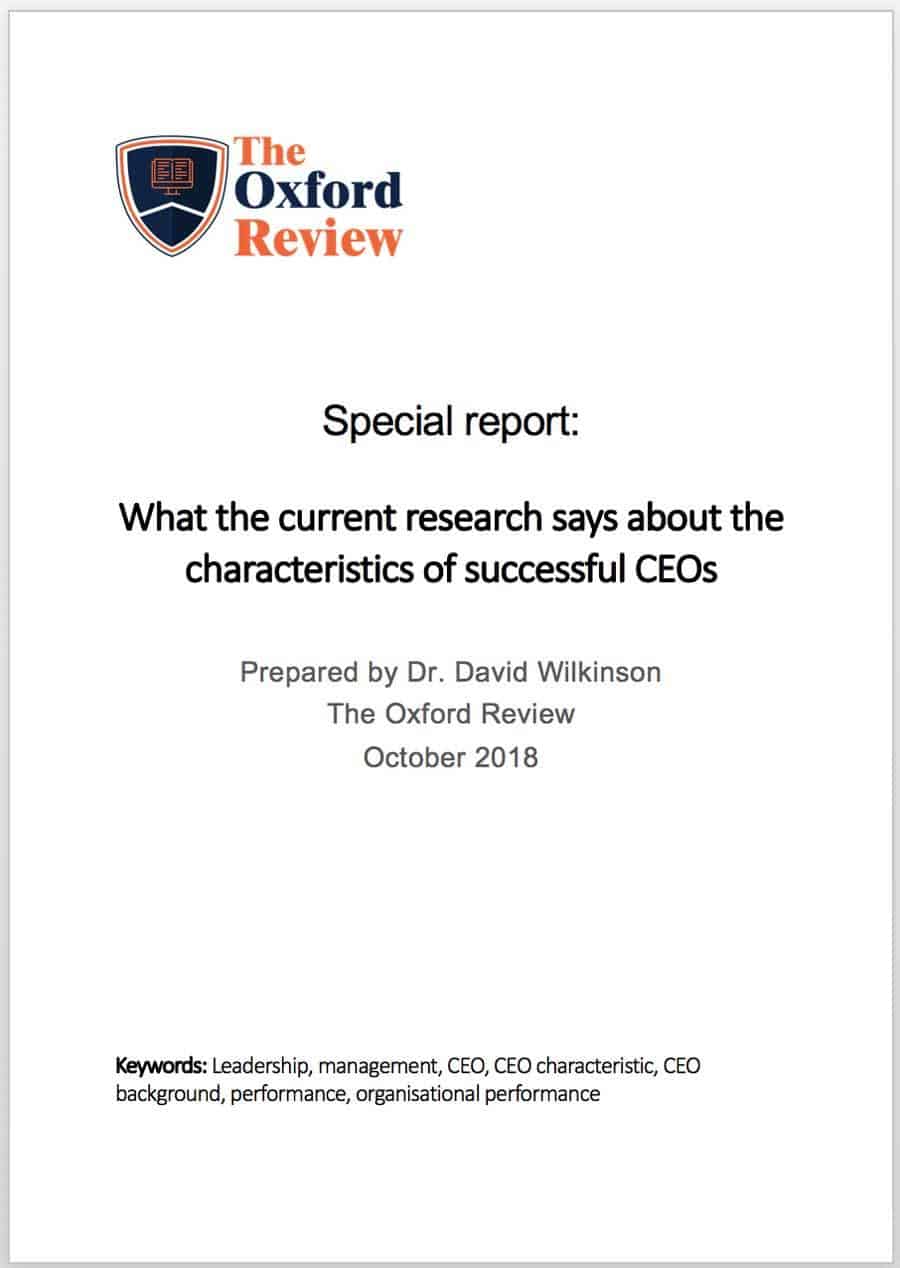 Whilst there is little doubt that organisational performance relies on a multitude of factors, one of the most prevalent being the characteristics of the organisation’s Chief Executive Officer (CEO). This has been a growing area of interest with an average of 6,000 published studies being conducted in 2009 with this average rising to over 11,000 a year since 2013.

As a result of this interest, and a direct request for more information from members, we have compiled a research briefing about the very latest findings about CEO characteristics and their impact on performance.

A 20161 study looking at the characteristics of 832 CEOs found that:

The above study also found that:

The type of degree that the CEO holds has an impact on the firm’s research and development funding:

This was backed up by a wide ranging 2018 study9

The impact of organisational ownership

A 20132 study found that the approach of CEOs tends often to be based on the ownership of the organisation:

The impact of entrepreneurial CEOs

A 20183 study found that more entrepreneurial CEOs or leaders with the following characteristics:

tend to develop greater levels of openness to innovation in their organisation.

In part, it has been found that an entrepreneurial outlook is largely fostered by their education and work experience. In particular:

all predict a more entrepreneurial and innovation focused approach.

These findings have been backed up in a separate 2018 study15. Additionally, the level of openness to innovation that an organisation has the more ambidextrous (see below) it will be. Furthermore, ambidextrous organisations tend to perform better in changing, volatile and fast moving environments. They tend to be more agile and open to change.

CEOs from another national culture (not the home culture) or CEOs who have lived abroad tend to foster both a greater internationalism in their firms and a more international outlook4. This was extended by another 2018 study10 which found that CEOs with foreign experience are significantly more likely to be paid more and obtain higher levels of performance related pay.

Use of social media by CEOs

One interesting, if quirky, 20185 study found that CEOs who use Twitter to share information and knowledge about their organisation and interact with the public tend to have higher trust ratings… as long as the tweets aren’t defensive.

A new 2018 study found that how materialistic a CEO is has quite an impact on their organisation and performance6:

Materialism is measured by a CEOs’ relative ownership of luxury goods. The psychology literature defines materialism as “a way of life where an individual displays an attachment to worldly possessions and material needs and desires”.

The study found that organisations with materialistic CEOs tend to:

Humble CEOs with and without vision

A 20178 study looking at the senior leadership of 65 firms found that CEOs who are considered to be humble and who genuinely seek feedback about their performance from across the organisation tend to have more effective top management teams and their organisations tend to perform better than organisations with less humble (feedback seeking) CEOs.

Further, the study found that humble CEOs with and without a clearly articulated vision are both associated with higher performing management teams and organisations. However, and interestingly, the effect of a humble CEO on organisational performance and senior team performance is stronger with CEOs without a clear vision. This suggests that a CEOs’ articulated vision has a strong impact on the organisation and management team through some form of constraining effect which was not investigated in this study.

Another study in 2018 found that overconfident CEOs and CFOs are significantly more likely to engage in tax avoidance behaviours when an organisation is under pressure than more humble CEOs. It is the CEO confidence level that indicates whether illegal tax activities are likely to occur13.

CEOs and board members with higher educational background and greater expertise and experiences tend to contribute to higher levels of organisational performance and lower risk for organisations.

In particular, how complementary the specialist skills and expertise the CEO and directors have has a significant positive impact on organisational and team performance. It is the mix and range of specialist skills and the educational attainment levels across the top management team that makes the difference11.

This study has been backed up by another unrelated, but large scale, study of 16,158 CEOs which found that generalist CEOs have lower levels of performance than specialist ones, if the mix on the board is complementary12.

A range of studies have found that CEOs who are better with uncertainty are strongly associated with better levels of both top management team and organisational performance.

In particular, a 2018 study found that CEOs who engage in uncertainty avoidance behaviours (denial and avoidance of ambiguous and uncertain situations and the creation of false certainty) tend to promote lower levels of CSR (Corporate Social Responsibility) and performance and have higher levels of narcissistic characteristics14.

An interesting study from 201815 has found that the cognitive capability of the CEO, particularly in their ability to deal with uncertainty (see the finding from above) and their cognitive flexibility (ability to take in peripheral and diverse information and change decision and ways of thinking), is one of the most important factors. CEOs with high levels of cognitive flexibility and an orientation towards uncertainty and complexity were found to create much more ambidextrous organisations.

Using two different forms of regression analysis a recent (2018) in-depth study16 found that when looking for a target organisation for acquisition or for a merger that the acquiring organisation’s CEO has a significant impact on the decision. Whilst this is probably to be expected, the study found some other interesting findings:

There is a significant amount of research looking at CEO psychological characteristics and the impact of these on their organisation.

The term dark represents the idea that the combination of these three personality attributes creates a perfect storm of largely malevolent behaviours.

Psychopathy is an antisocial behaviour whereby the individual has low levels of empathy and interest in the well-being of others, combined with high levels of impulsive and thrill-seeking behaviours. People with psychopathic tendencies are frequently considered to be harmful and toxic to others.

People who score high in Machiavellianism tend to be amoral, unprincipled and frequently resort to the manipulation of others in order to achieve their own success.

It is not hard to see how a combination of these three personality types can be considered to be particularly toxic in an organisational context.

The impact of leaders/CEO’s with Dark Triad tendencies

A 2017 study17 found that leaders with dark triad traits tend to be aggressive, authoritarian and engage in highly manipulative behaviours with little or no regard for the health or mental health of the organisation’s employees, or indeed their own peers. Such leaders tend to be callous and manipulative, whilst also having a sense of entitlement and superiority.

As a result they tend to develop unhealthy relationships with other people and engage in behaviours that are detrimental to their followers’ well-being and career success.

Additionally, it was found that the psychopathic and narcissistic tendencies of the leader indirectly predicts approximately 21% of the onset of depression in employees. This has a direct negative impact on employee and organisational performance.

Another study20 found that organisations with CEO’s with higher than average levels of narcissistic tendencies are significantly more likely to become embroiled in lawsuits than any other organisation.

Openness to experience has been found a key trait in such conditions and correlates closely to a CEO’s strategic change capability.

Additionally, a level of extraversion and emotional stability are also (but less so) important.

Further it has been found that the organisations of CEO’s high in conscientiousness and agreeableness tend to do significantly worse in difficult operating and trading conditions.

Extraversion and the cost of capital and risk

Bill gates mused in an interview24 that “Microsoft is always two years away from failure”. The need for constant product and systems/business innovation is no longer an issue of competitive advantage for many organisations, but in a world of constant change and volatility, is now simply a matter of survival. It should not be surprising to find that CEO characteristics have an impact on the innovation performance of organisations.

The first finding23 is that CEO risk aversion as a characteristic, leads to both an increase in cash holdings by the organisation and a decrease in research and development activities. Early studies found that the older a CEO is and the longer they have served in an organisation the more risk averse they tend to be. However more recent studies have discovered that this relationship between age, tenure and risk appetite is not that straightforward and it depends on two other CEO characteristics:

Less flexible CEO’s tend to be more risk averse and as a consequence have a negative impact on innovation and organisational innovation outcomes.

The CEO personality that have been found to be associated to organisational innovation are:

Lastly there is considerable evidence22 that CEO emotional stability, optimism and resiliency are significant factors underpinning transformational leadership attributes which both increase innovation behaviours in particular but tend to result in healthy corporate leadership and cultural attributes which support organisational performance

From this overview of the most recent research evidence it is clear that the characteristics, education attainment level and cognitive capability of the CEO, together with their relationship and complementarity with the senior management team has a significant impact on organisational performance.