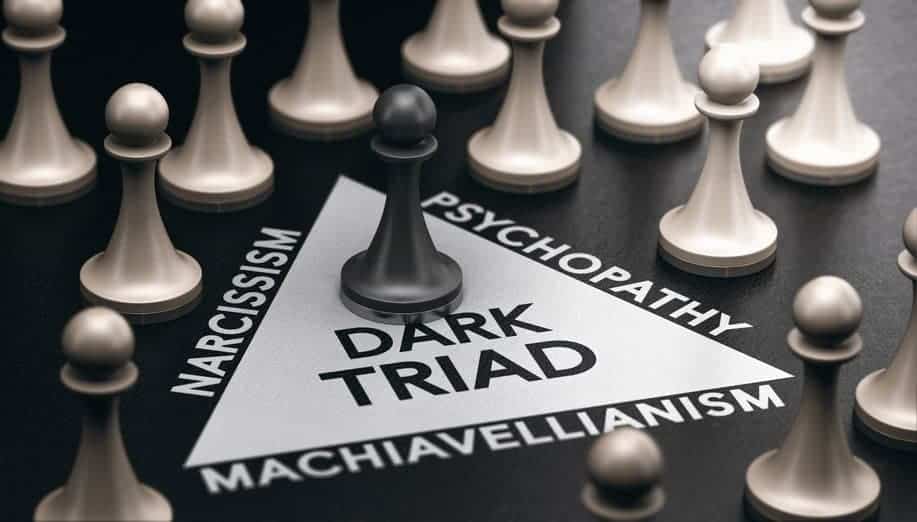 Coach Dark Triad Traits may be a neglected area of attention. What happens when the coach has dark triad traits? In a new study, Professor Adrian Furnham, of University College London has explored the area of coach dark triad traits and what impact they might have on coachees.

Executive coaching is a popular way for senior executives to improve their professional skills and help to achieve developmental goals. This process requires what is known as the working alliance, in which the coach and executives form a positive, cooperative and constructive working relationship.

The dark triad is a trio of the negative personality traits of:

Psychopathy is an antisocial disorder that is marked by a lack of normal emotional response and empathy, coupled with low impulse control. Psychopaths find it difficult to develop normal functioning relationships and display high levels of egocentrism. Psychopathy frequently leads to the individual’s manipulating others for their own purposes, with no sense of guilt or empathy, and can be highly damaging to their victims.

There are two forms of psychopathy:

Narcissism is the pursuit of self-gratification through vanity or egotistic admiration of one’s idealised self-image and is expressed as a need for more authority and an over-inflated view of oneself.

There is an interview / podcast with one author of the paper this blog is based on here:

Previous research looking at the importance of establishing a positive coaching relationship (working alliance) with clients and the impact of the coach’s personality traits on this professional exchange have found that:

• The quality of relationship between coaches and their clients is the second most crucial factor that impacts coaching effectiveness.
• Emotional intelligence is positively connected to pro-social behaviours and it reduces antisocial deviant behaviour.
• Narcissistic people have an over-inflated sense of self and their job performance or work quality.

A new study by researchers from University College London in the UK and the Norwegian Business School in Norway has looked at the effects of dark triad personality traits on executive coaches’ effectiveness with clients and their career satisfaction and what impact emotional intelligence and self-monitoring has on these.

• Primary and secondary psychopathy, and Machiavellianism combined, have a significantly negative impact on both the coaches’ career satisfaction and their effectiveness as a coach.
• Unexpectedly, it was found that there appears to be a positive connection between narcissism and coaching effectiveness. It was, however, found that narcissistic executive coaches tend to express high opinions of their coaching skills when they self-report data. Whether clients would agree with their self-assessment or not is another issue and one not covered by the study.
• High self-monitoring reduces (but does not eliminate) the negative effects of narcissism and Machiavellianism on coaching effectiveness.
o For executive coaches with primary psychopathy, their lack of agreeableness reduces coaching effectiveness, even with self-monitoring.
• High emotional intelligence acts as a buffer against the harmful effects of dark triad traits on career satisfaction (but not effectiveness).
• Higher levels of emotional intelligence also help executive coaches with Machiavellianism to control – through emotional regulation – their urges to manipulate clients for higher social status and power.

The main point the study makes…

What I found interesting, apart from the study findings, is the incidence of dark triad characteristics prevalent in the coaching community. Whilst the study doesn’t give a breakdown of the exact number of coaches (n=545) displaying dark triad traits, it was certainly enough to measure and, looking at the analytics, the research found that just under 98% of the respondents (coaches) displayed narcissistic traits. This suggests that a significant number of executive and business coaches have dark triad traits. Given the nature and aims of coaching, having any proportion of manipulative, narcissistic and unempathetic coaches in the coaching population is alarming.